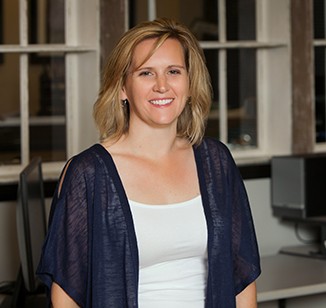 Angela Nuveman began her architectural career almost 20 years ago, working as a draftsman with the Spicer Group in Saginaw, Michigan. In those early years, she designed residential home projects as well as commercial and recreational spaces. She did so while simultaneously attending Lawrence Technological University, where she earned a Bachelor of Science degree in Architecture in 2001.

She left Spicer Group after six years to join Delcor Homes as an architectural designer working under the leadership of Todd Hallett. At Delcor, Angela designed and drafted construction documents and executed custom design requests for residential homes. She was also responsible for maintaining documentation for maintaining ISO certification, a hallmark of quality that Delcor Homes was one of the few production residential home builders to achieve.

Angela worked at Delcor for almost three years. Her next architectural design position was with Global Environmental Engineering in Flint, Michigan, where she served as a designer/draftsman, drafting drawings and preparing reports for environmental engineering projects.

In May 2017, Angela was recruited by Todd Hallett to join T.K. Design &Associates. A licensed builder, Angela brings to the T.K. Design team not only a broad range of career experience, but also a thorough knowledge of home building with a focus on quality construction.

Our homes are desired by builders and buyers across North America, and we're a respected voice in the home design industry.